So the topic of our study last week was women in leadership.  There is a lot of debate regarding the issue of whether or not women should be aloud to participate in the leadership of churches.  Women have traditionally been relegated to the duties of watching the children, taking care of the refreshments and if the church is really progressive they might even be allowed to lead a women’s Bible study.

Seminary’s within the last ten years have experienced a substantial increase in enrollment from women.  This clearly shows that women are aspiring to do more than bake cookies and wipe noses in the church.  While these are all very important things, but are women capable of doing more?  Does the Bible allow for more?  Is the Evangelical church ready for more from women?  I think they are.

Currently there are a number of prominent women leaders in the church.  Women like Beth Moore, Kay Arthur and Priscilla Shirer.  Are they being unbiblical by sharing the gift that God has given them with the world?  Some would say yes, some would say no.  Those that would say yes typically use this scripture to support their case.

A woman must quietly receive instruction with entire submissiveness.  But I do not allow a woman to teach or exercise authority over a man, but to remain quiet.  For it was Adam who was first created and then Eve.  1 Timothy 2:11-13

I’ve heard so much controversy about this passage that I don’t know what to think.  The primary argument is that it was written to a specific group of individuals that were experiencing consistent disruptions in the synagogue.  Therefore it doesn’t apply to all women in the church universal.  Regardless, this is but one verse against women that we find in the midst of many verses supporting women in ministry.  Here are a few examples. 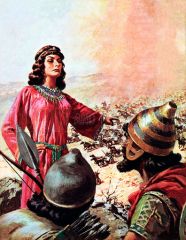 Deborah – Deborah is probably the most famous female leader in the Bible.  She was a judge of Israel.  At the time that she ruled, a judge was the highest position that anyone could hold in the nation.  It was like being the king and the high priest all wrapped into one.  (Judges 4-5)

Phoebe – Many have heard of Pheobe who was so helpful to Paul and his ministry.  Why is it that the translators decided to translate the word diakonos as “servant” instead of deacon as its translated elsewhere?  (Romans 16:1)

Anna – The prohetess Anna is mentioned in Luke 2 as one who ministered in the temple.  She was said to never leave and in fact spoke to “all those who were looking for the redemption of Jerusalem.”  (Luke 2:38).  That sounds like a pretty prominent place in leadership to me.

For all of you who were baptized into Christ have clothed yourselves with Christ.  There is neither Jew nor Greek, their is neither slave nore free man, there is neither male nor female; for you are all one in Christ.  Gal. 3:27-28

This seems to be consistent with what we see in the garden of eden.  God made us in His own image, both male and female.

I’m not quite sure where I stand in all of this.  I tend to lean more toward supporting women in leadership than not, but at the same time, I believe that there are some specific roles for women in the church that I didn’t even get into here.  We’re still fleshing this out in our community group.

What do you think?